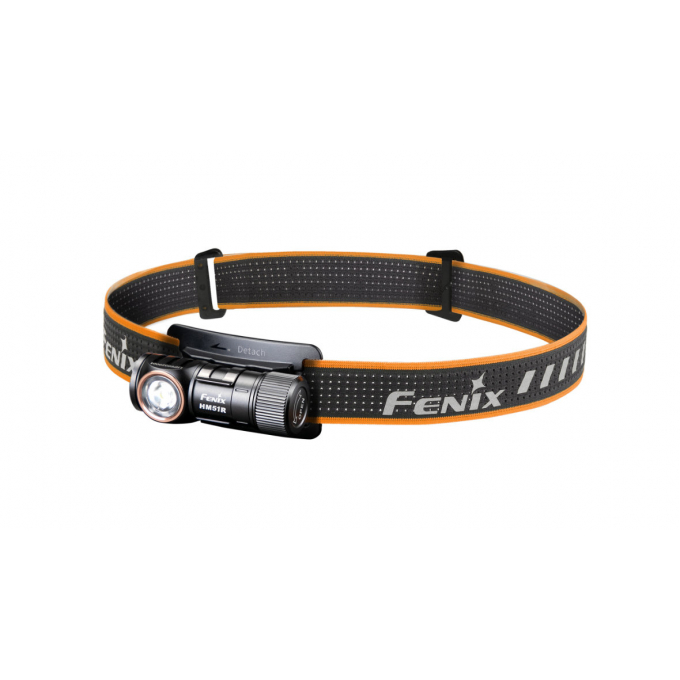 The second generation of the very popular Fenix HM51R Ruby V2.0 rechargeable headlamp offers a luminous flux of up to 700 lumens of neutral white light with an afterglow of up to 120 meters and is also equipped with red LEDs. It is powered by one rechargeable battery type RCR123A (included in the package).

By buying this product you can collect up to 16 points.

The second generation of the very popular Fenix ​​HM51R Ruby V2.0 rechargeable headlamp offers a luminous flux of up to 700 lumens (ANSI) of neutral white light (4500 K) with an afterglow of up to 120 meters and is also equipped with red LEDs. It is powered by one rechargeable battery type RCR123A (included in the package), which is charged directly in the flashlight via a modern USB-C connector, alternatively it is possible to use a disposable lithium battery CR123A (with a limited maximum power of 150 lumens). In addition, there is an indicator LED in the control button, thanks to which you will always know when to charge the battery. The tip of the lamp is magnetic, so it can be easily attached to anything iron. The HM51R has nine different lighting modes that allow you to choose between high performance and long life (up to 120 hours). The lamp is powered by digitally controlled constant current to guarantee constant light output even when the voltage in the batteries is reduced (during their gradual discharge).
The all-metal construction ensures high durability, optimal cooling and at the same time is fully waterproof according to the IP68 standard up to a depth of 2 meters under water. The practicality of the headlamp increases the possibility of removing the light from the head holder and using it as a small flashlight. In addition, the headlamp is equipped with a removable steel clip, so you can easily attach it to your pocket or strap. The Fenix ​​HM51R V2.0 headlamp is the ideal companion for various sports activities, trips to nature and to the home and to work.

The Fenix ​​HM51R headlamp is a limited edition, which is based on the Fenix ​​HM50R headlamp and offers a number of improvements. For example, a warmer shade of light, a magnetic tip, constant regulation in most modes, more red light modes and more. If you are interested in all the differences between the two models, read the article Comparison of Fenix ​​HM50R V2.0 and Fenix ​​HM51R Ruby V2.0.

By default, there may be a black insulating cap on the battery inside the flashlight. Remove it from the battery before using it for the first time.

Battery charge status indication: After a short press of the button (the headlight must be switched off), the LED indicator in the button is activated. If the LED is green, the battery is more than 80% charged. Green blinking means 50-80% capacity. If it glows red, it is 20-50% charged. Flashing red indicates that less than 20% of the battery capacity remains. The indication only works properly with RCR123A / 16340 rechargeable batteries.

Charging: Open the rubber cover of the charging connector and connect the enclosed cable to the flashlight (USB-C connector), connect the other end of the cable to a computer, power bank or USB adapter to the mains or car (not included). During charging, the side button lights up red and lights up green when fully charged. After charging the flashlight, reseal the charging connector with a rubber cap. Charging a fully discharged battery takes about 1.5 hours. In an emergency, the flashlight can also be used while charging, but only the white 5-lumen mode and red modes will be available.

Do not disassemble the sealed part of the lamp head yourself, as this will void the warranty.
When using a disposable CR123A battery, do not attempt to charge it in the flashlight.
If the protective rubber rings appear damaged after prolonged use, replace them. The rings should also be lubricated to prevent rubber erosion. By following these rules, the flashlight will be properly protected against water.
If the flashlight is blinking, does not switch to higher power modes, or does not turn on, this may be one of the following reasons:
The battery is low - charge or replace it.
The contacts inside the flashlight are dirty - clean them with a cotton swab.
The back of the lamp is loose - tighten it.