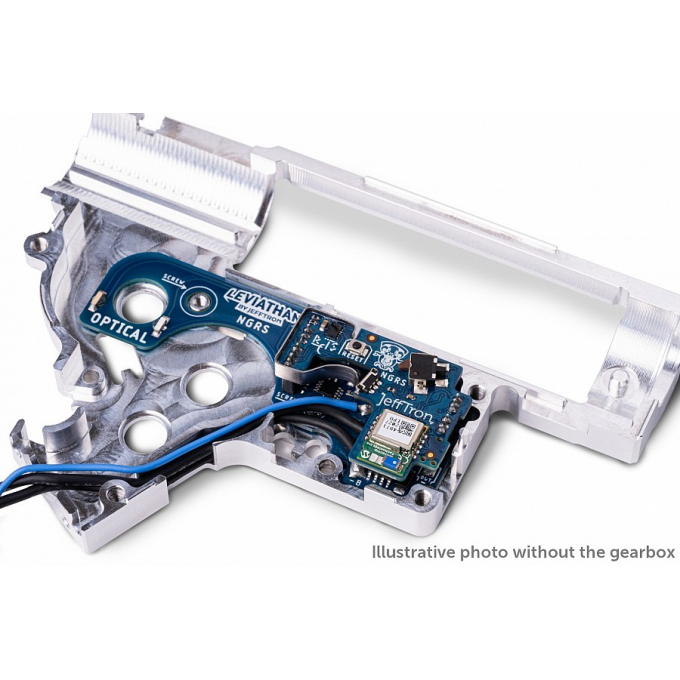 By buying this product you can collect up to 28 points.

Please skip this part, if you already bought CNC gearbox from Retroarms, because it has enough room for the wiring

- If you want functions on SAFE position, cut the selector plate in the red area. WARNING: Mechanical locking will be disabled 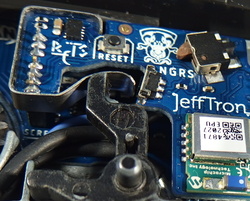 - Thanks to advanced electronics, Leviathan - NGRS can be used with any common gearbox upgrade and gun rate of fire
- Comes with wires to stock (loose end) with mini 40A fuse and deanT connector to solder after gun assembly
- There are high quality power wires 1,5 qmm (AWG16) with thin and hard MPPE insulation and signal blue wire 0.34 qmm (AWG24) with MPPE insulation
- Power wires outer diameter is only 2,06 mm and blue wire 1,24 mm
- Board covered by conformal coating, it protect Leviathan - NGRS against damage from water
- On the board is input port for controlling output port, 3rd burst, external trigger, magazine reload, etc. and output port for the hop-up chamber BBs illumination, powering electric magazine, flashlight, laser, etc. 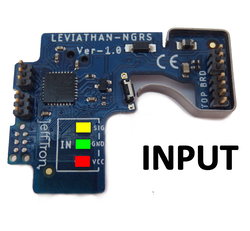 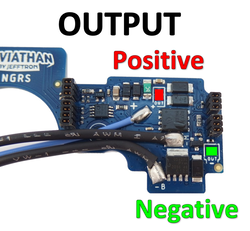 - For right pre-cocking function is necessary to have in the gearbox functional antireverse latch. WARNING: it increases wear and tear on the gearbox.
- Specified for common batteries up to 17V (Ni-xx 8.4 - 12V, lipol 7.4 - 14.8V)
- Device increases gun rate of fire and battery holds longer, than with basic wiring
- With active braking ON piston isn't partially stretched, spring is fully released, parts in mechabox aren't under strain and nozzle locks hop-up chamber in greater part (depends on ROF)
- In weapons with very high rate of fire (ROF) active brake solves multiple shots in semi mode
- The braking effect is the most powerful with high torque motor. Note: Lower braking intensity spares the motor coils.
- Remove from the gearbox: cut off lever, trigger contacts and trigger block, you will not need them with the Leviathan - NGRS 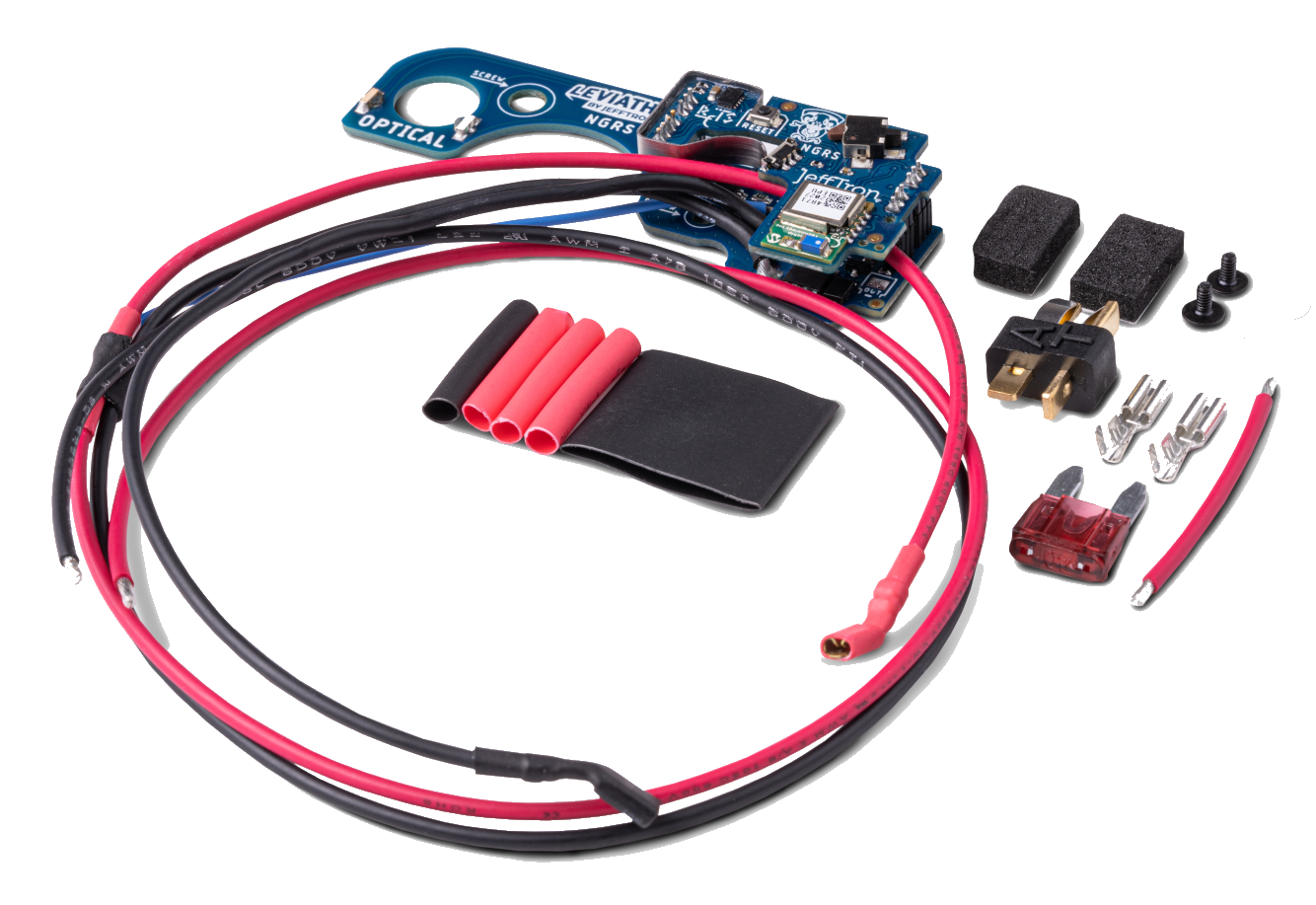 SAFETY WARNING:
- Installation of this device into the gearbox requires advanced technician skills!
- Please read these informations before installing your device to prevent any damage.
- Short circuit or incorrectly connected battery will cause immediate damage to the device which is not covered by the warranty. It can lead to fire or even battery explosion.
- Disconnect battery, when you aren't using the gun! Otherwise you will fully discharge the battery. Because the device drains small amount of current from the bettery all the time.
- Do not connect battery when gun pointing towards you, another person or an animal.
- Do not modify, repair and put into any kind of liquids or thermal shock the Leviathan - NGRS.

WIRING CONNECTION INTO THE GUN: 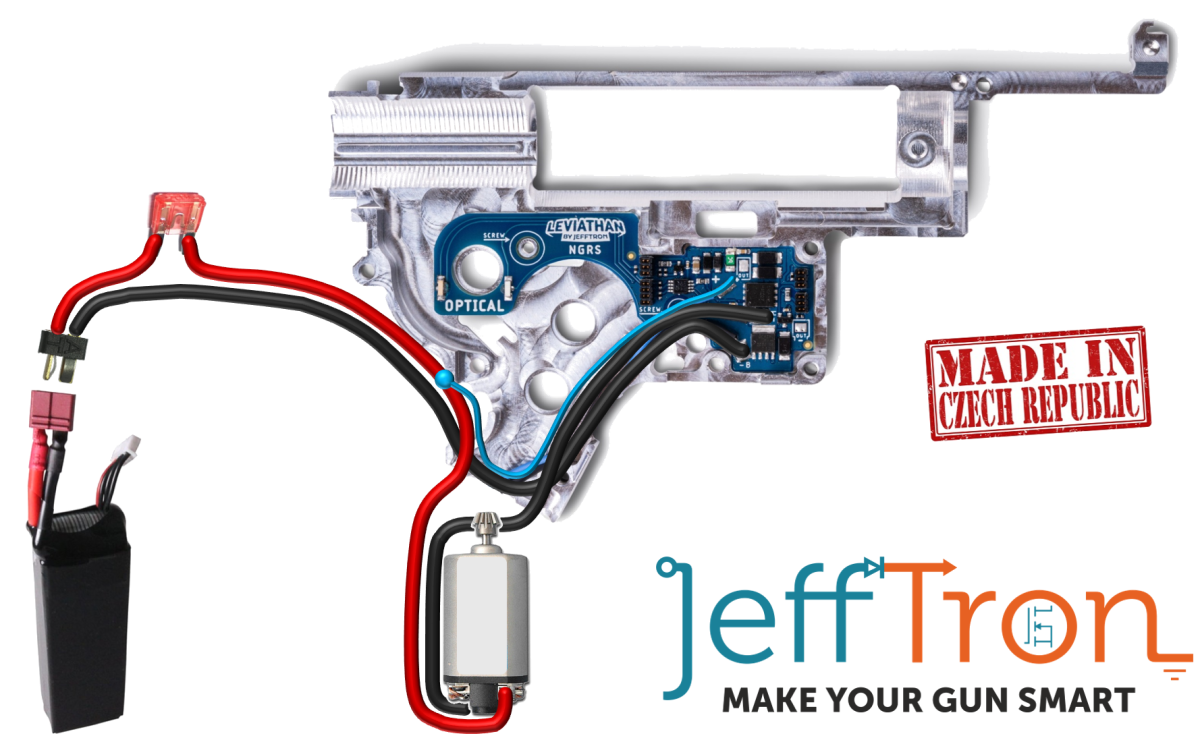 
MAIN FUNCTIONS:
- Adds new shooting modes independent for every position on the fire selector (SAFE - SEMI - AUTO)
- Three adjustable bursts (range 2 - 20 shots)
- It preserves empty magazine detection like the original gun
- Rate of fire can be reduce to 40%. It add breaks between shots to reduce RoF. It gives fast trigger response even with very low rate of fire, just like in a real gun
- Adjustable strength active braking (can be disabled)
- Pre-cocking function for instant shot on SEMI fire
- Delay between shots adds time in which isn't possible to shoot, it simulates the delay from gun reload or recoil (range 0,1 - 4,0 seconds)
- Electronic fuse set sensitivity for high current detection to avoid any damage if something goes wrong
- Low battery indication for 2S - 4S li-pol and 3S - 4S li-fe
- Virtual magazine simulates low capacity magazines, it will force the gun to stop shooting when it reach 0. There can be set warning after shot before empty magazine and how it will be reloaded
- On the board are input and output ports for controlling external devices or Leviathan
- Statistics screen shows shooting output with cycle timing, motor current consumption, rate of fire and temperatures. It allows you to do fine-tune gearbox upgrade
- Application shows actual battery voltage value. Color lines indicates battery charge status where green is OK, orange will warn after each shot and red will not allow to shoot
- User can save multiple settings under profiles
- Update function fixes bugs and adds new features to the device
- There are three shot counters. Total count every shot during the device lifetime. User counter can be reset by user anytime. Power-up counter is reset by battery connection
- Error log shows errors made during the device life also can be erased by user
- For better security wireless connection can be disable by the selector switch (can be deactivated)
- Leviathan monitors current, voltage and temperature to avoid any damage when something go wrong.
- Motor vibrates and beeps as a feedback for user
- Programmed settings are saved in the Leviathan memory immediately after their change, so you can immediately test it and settings aren't lost when is battery disconnected or lost connection with smartphone
- New functions are for free for every user via online update function