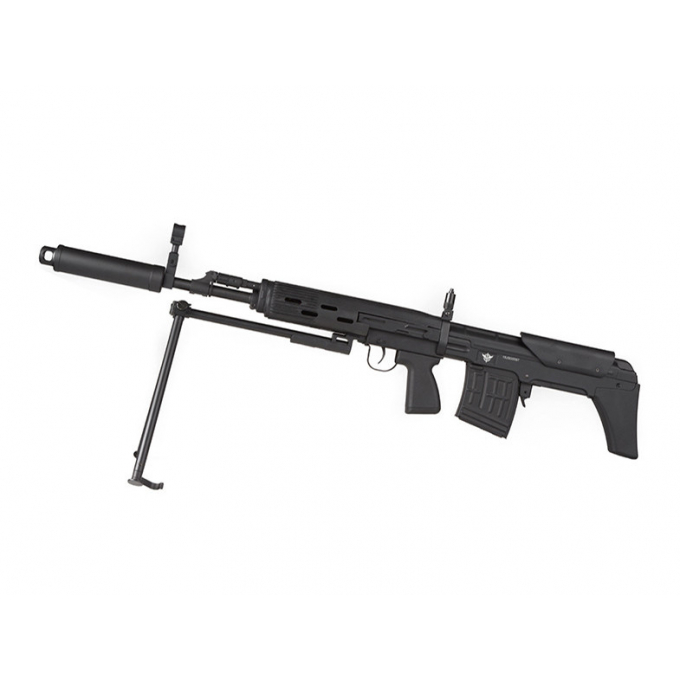 By buying this product you can collect up to 63 points.

Airsoft Pioneer presents a replica that has been long awaited by Russophiles and enthusiasts of weaponry from beyond the Eastern border.  SWU is an airsoft version of a sniper rifle developed at the turn of 80s/90s, which was afterward used, e.g. during the conflict in Chechnya, remaining to this day a standard issue sniper rifle used by FSB and MVD.

In short, SWU can be described as a well-known Soviet sniper rifle redesigned into a bull-pup / stockless version. Therefore, the replica receives an enormous advantage of many bull-pup constructions - it allows to retain the long barrel with the overall length of the rifle comparable to that of an assault rifle. A sharpshooter wielding an SWU thus has a much better mobility and maneuverability - also in vehicles, indoors or in difficult urban conditions. Additionally, this version was expanded with the option of firing in a full auto mode!

The replica was made entirely of metal, steel elements include:

Similarly to the original live firearm, polymer parts include the cradle / grip panels, stock pad, cheek pad and the pistol grip. The replica features an integrated, foldable bipod and a silencer (with dampening filling) mounted on a 14 mm left-handed thread. Inside is a very long, 650 mm internal barrel that provides a high efficiency - it is also worth to add that the complete length of the replica is practically identical to that of a standard AK74. The heart of the replica is made up from a dedicated gearbox, which features, among others, a set of reinforced steel gears, piston with 2 steel teeth and a bearing-mounted spring slide.

SWU can fire in semi and full auto fire modes - the rear part of the receiver features a winged selector, just like in SVD replicas. Next to the trigger - beneath the index finger - is a simple, sliding safety. The battery (stick type - included in the set) is stored inside the handguard. In order to remove the handguard or the dust cover all that is necessary is to pull the lever - just like in the live firearm.

The replica has a side mounting rail that allows to attach optics / SVD rails. If no optics are available, it is possible to aim using flip-up iron sights.

The scope visible on the photos is not included in the set!